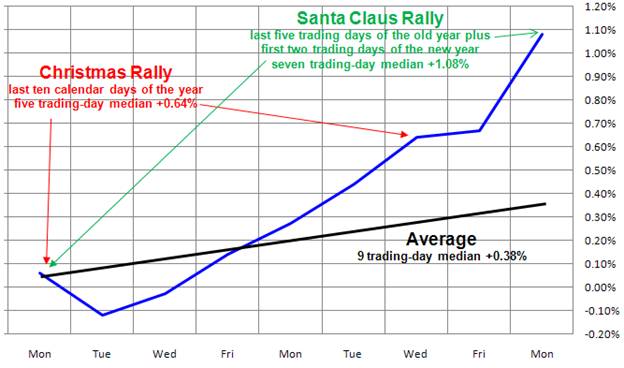 No Santa Claus Rally in December?

The Santa Claus Rally refers to a seasonal stock market trend that typically occurs during the last five business days in December and first two days of January. During this period, the market is often observed to yield positive returns, an average of 1.30%, leading to its naming. This trend has been observed a total of 58 times since 1950, an astonishing 80% probability. There are multiple theories as to why this happens – but in short, there is no clear specific reason. One theory is that many employees receive Christmas bonuses, another is that we are simply in a better mood in December itself. Yet another plausible reason is related to tax-loss harvesting strategies.

Why is a Santa Claus Rally significant?

Based on data from the 2019 Stock Trader’s Almanac, the stock market typically increased by an average of 1.3% during this period. Some investors rely on this seasonal trend as an indicator of bullish optimism and may even use it as a tool to predict performance of markets in the upcoming year, though by no means is this entirely accurate (There are following years where the markets rallied in the absence of a Santa Claus rally).

However, this year 2022, there has been no discernible rally in the stock markets. This is especially so as the Federal Reserve plans to keep interest rates high next year even as the US economy slows. As of 30th December, the S&P 500 is notably down -5.90% for the month (Google finance). Compared to past price history, the markets are unexpectedly quieter with more downward and sideways price movement. Alas, while Santa Claus may be counted on to deliver the presents in our imagination, the reality is not quite so the same.

Does the absence of a Santa Claus rally spell doom and gloom for investors?

While there is strong evidence that the Santa Claus rally is real, it doesn’t mean that it will continue to be so. If there are strong changes to investors’ sentiments, the markets will move according to these shifts. Going forward into 2023, one of the best ways to continue being a better investor is to constantly invest in your knowledge and recognize that market opportunities are plenty, regardless of the macro environment.

The world’s second largest economy is showing signs of roaring back to life following a decision this month to abruptly dismantle the zero-Covid system that was initially implemented to curb the virus spread. Before the pandemic, China was the largest source of tourism for many countries, including ASEAN. Naturally, the moment Beijing announced it was getting rid of quarantine measures, the number of overseas flight searches hit an all time high in the past 3 years.

During the past week, the number of subway passengers in Beijing, Chongqing, Chengdu, and Wuhan increased about 40-100%, indicating that people in these cities are starting to go back to work, shopping, and dining out again.

What does this mean for investors?

The return of Chinese consumers to stores could benefit luxury retail brands like LVMH, Kering, and Tapestry, as Chinese consumers make up over 20% of sales for these companies according to Bain Capital. However, travel companies may see the most immediate impact as Chinese consumers look to book trips abroad after being locked down for three years. For example, Trip.com, the largest Chinese travel services company experienced a 250% increase in outbound flight bookings from Monday to Tuesday as restrictions are set to be lifted in January.

Apart from tourism, as a key trading partner and investor in the Asean bloc, China’s economic reopening will definitely be one of the key factors bolstering export oriented industries in the region, specifically Singapore. Ultimately, it is evident that the nation is entering a new phase of living and if the world’s second largest economy meets its goal of a 5% GDP growth, it could have a positive spillover impact on global markets.