Volatility in the stock markets continued last week. S&P 500 rose 2.4 percent on Friday, but it was not enough to make up for a week of declines. It was the sixth consecutive week of losses for global stocks (using the FTSE All-World Index), the first time that has happened since the Great Financial Crisis in 2008.

The latest rout has hit cryptocurrencies like Bitcoin while one of the largest stablecoins: TerraUSD imploded and was unable to hold its peg to the dollar. A stablecoin is a type of cryptocurrency meant to be pegged to a stable asset that should not fluctuate as much as bitcoin.

The volatility drew the attention of regulators and lawmakers. On Thursday, Janet Yellen, the Treasury Secretary and ex Federal Reserve chair said that “we really need a regulatory framework” after getting a “real-life demonstration of the risks”.

April inflation reading, based on the Consumer Price Index, came in slightly lower at 8.3% (vs 8.5% before), but still uncomfortably high. Core inflation – excluding more volatile components like food and energy – actually accelerated (0.6% in April vs 0.3% in March).

We started to see price acceleration in Spring of 2021. As yearly changes of prices of goods and services are measured against the same time last year, a higher base makes upcoming increases seem less troubling. This is also known as base effects. Some economists believe that this along with abatement of demand as prices increase will cause inflation to ebb too. However, these forecasts depend on supply side dynamics as well. Lockdowns in China and the continued conflict in Ukraine has stretched and exacerbated supply chain disruptions.

Mr. Powell was confirmed to a second four-year term at the head of the Fed on Thursday afternoon. This was mostly expected as a change may cause even more unwanted uncertainty as the Fed navigates a challenging situation: trying to do precision surgery with power tools. The Fed is effectively trying to tap on the brakes just enough to slow down the economy without tipping it into a painful recession. At an interview on Thursday, Chair Powell states: “The process of getting inflation down to 2 percent will also include some pain, but ultimately the most painful thing would be if we were to fail to deal with it and inflation were to get entrenched.”

How stocks have reacted to rate hikes in the past:

With three rate hikes done and at least four more expected, it is worth looking at how equities have done during rate hikes. Research from Dimensional demonstrates that US equity markets have offered positive returns on average following rate hikes. They go on to state that “reducing equity allocations in anticipation of, or in reaction to, fed funds rate increases is unlikely to lead to better investment outcomes.” 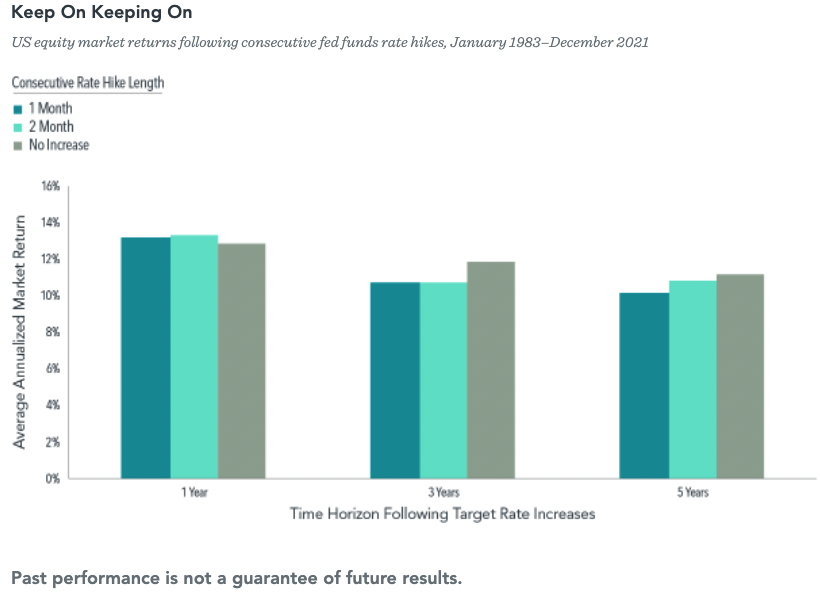 With the recent fall in stock prices, the S&P 500 equal weighted index is now trading below pre-pandemic five year average (15.6x forward EPS vs 16.6x) and near its 30 year average (excluding GFC in 2008-2009) of 15.7x. History suggests that markets tend to recover given supportive fundamentals (strong labor market, sustained consumer demand and a sound financial system).

Chinese equities were up for the week, in contrast to US stocks and global stocks. Mainland investors were buoyed by rumors that ByteDance might explore listing the Chinese version of TikTok in Hong Kong. Declining virus cases added to optimism that the worst might be over.

Along with the rest of the world, China is experiencing inflation too, with the Producer Price Index (PPI) hitting 8%, and CPI rising to 2.1% (relatively low as compared to the US, where the consumer contributes ⅔ to GDP). However, higher inflation is unlikely to deter PBoC’s accommodative stance.

On Friday, Elon Musk tweeted that his Twitter deal is on hold as he wanted to verify the volume of fake and spam accounts, but he was “still committed” to the acquisition. He would be on the hook for a hefty breakup fee (US$ 1bn) if he pulled out.

Where could markets go from here?

Risks to growth have increased lately but the worst case scenario has not materialized. Companies and households are entering this next stage of the economic cycle with good fundamentals and strong balance sheets (and wide profit margins vs. historical levels for many corporations). Previously, we saw a divergence in expectations from bond and equity investors: where the former appears less optimistic but now after equity markets sold off, expectations are more aligned.

While growth may be held back by persistent inflationary pressures in the short term, investors can take a diversified approach: seeking balance between value and growth, and US and international. During times of market volatility, it becomes even more important to pay greater attention to the things one can control: diversification, asset allocation and cost.

The information provided herein is intended for general circulation and/or discussion purposes only. It does not account for the specific investment objectives, financial situation or needs of any individual. The information in this document is not intended to constitute research analysis or recommendation and should not be treated as such.

This does not constitute an offer or solicitation to buy/sell any financial instrument or to participate any investment strategy. No representation or warranty whatsoever (without limiting to accuracy, usefulness, adequacy, timeliness or completeness) in respect of any information (without limiting to any statement, figures, opinion, view or estimate). Syfe does not undertake an obligation to update the information or to correct any inaccuracy that may become apparent at a later time. All information presented is subject to change without notice. Syfe shall not be responsible or liable for any loss or damage whatsoever arising directly or indirectly as a result of any person acting on any information provided herein.

The information provided herein may contain projections or other forward-looking statement regarding future events or future performance of countries, assets, markets or companies. Actual events or results may differ materially. Past performance figures are not necessarily indicative of future of likely performance. Any reference to any specific company, financial product or asset class in whatever way is used for illustrative purposes only and does not constitute a recommendation. Investors should note that there are necessarily limitations and difficulties in using any graph, chart, formula or other device to determine whether or not, or if so, when to, make an investment. The contents hereof are considered proprietary information and may not be produced or disseminated in whole or in part without Syfe’s written consent.