S-REITs (like their global counterparts) are required to distribute 90% of income earned (from rental income and capital gains when a property is sold for example) as dividends to unitholders and investors.

In the table below, we show income proceeds on a monthly basis when investing in Syfe REIT+. As compared to investing in physical real estate in Singapore, which typically cost more than a million dollars (and not including additional costs such as stamp duties, taxes and cost of maintenance), when an investor invests the same amount in REIT+, estimated income generated monthly is about $4500.

Despite the disruptions caused by the pandemic, real estate values in Singapore and beyond have continued to grow.  In fact, the momentum in rising property values has not abated, with rents increasing by a wide margin. It is a good time to be a landlord! As compared to global cities, Singapore has seen the highest growth in prime residential rentals in particular.s

Even as economic growth was revised down closer to 3%, as compared to the headier 3-5% from previous forecasts, REITs still offer a compelling investment opportunity as the world re-opens, amid rising interest rates and a subsequent slow down in global economic activity.

Optimism for Office and Retail REITs

Office REITs and Retail REITs historically have the highest average dividend yields. This has mostly held up even during the pandemic. Moving forward, we continue to see cause for optimism as incoming leases have been stable or even priced higher on average than outgoing leases.

Here is a deep dive into these two REIT subsectors: 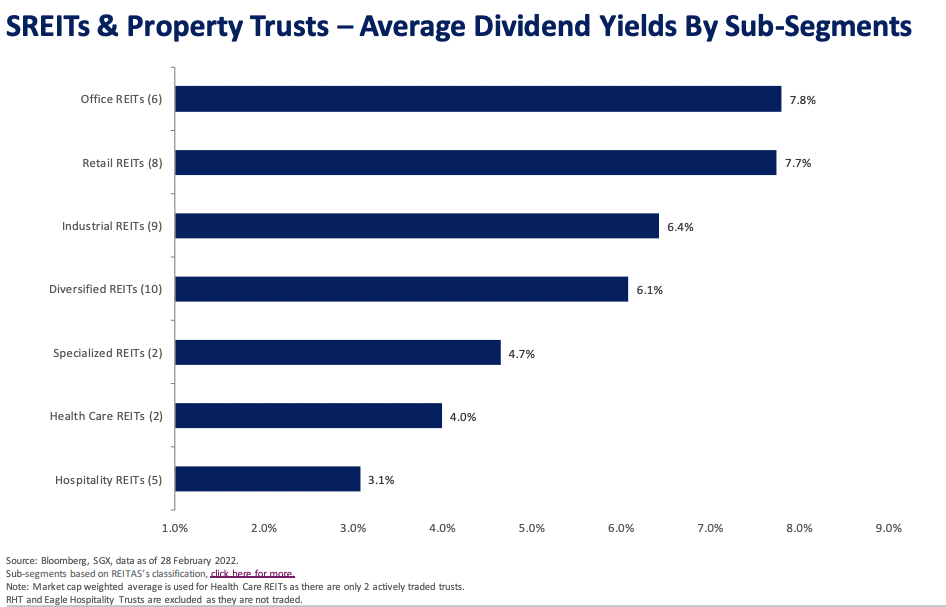 Leases for healthcare properties tend to be much longer, usually stretching into decades. For example, the latest renewal term for Parkway Hospitals is 20 years, ending in December 2042, with an option to renew for a further 10 years. According to SGX Research, it has a triple net lease arrangement which means that the Reit does not bear property taxes, property insurance, property operating expenses and is unaffected by inflated-related escalating expenses.

REITs as a natural inflation hedge

To use an example from the US, when we compare US REITs vs S&P 500 during different inflationary periods, we see REITs outperforming when inflation is moderately high (>2.5% annually). We would expect to see this trend play out in Singapore too; income from real assets like REITs are generally tied to inflation – as incoming leases increase in value and streams of revenues increase, that passes through to income. When incoming leases are stable or priced higher, along with improvements in utilization, investors enjoy higher distributable income. 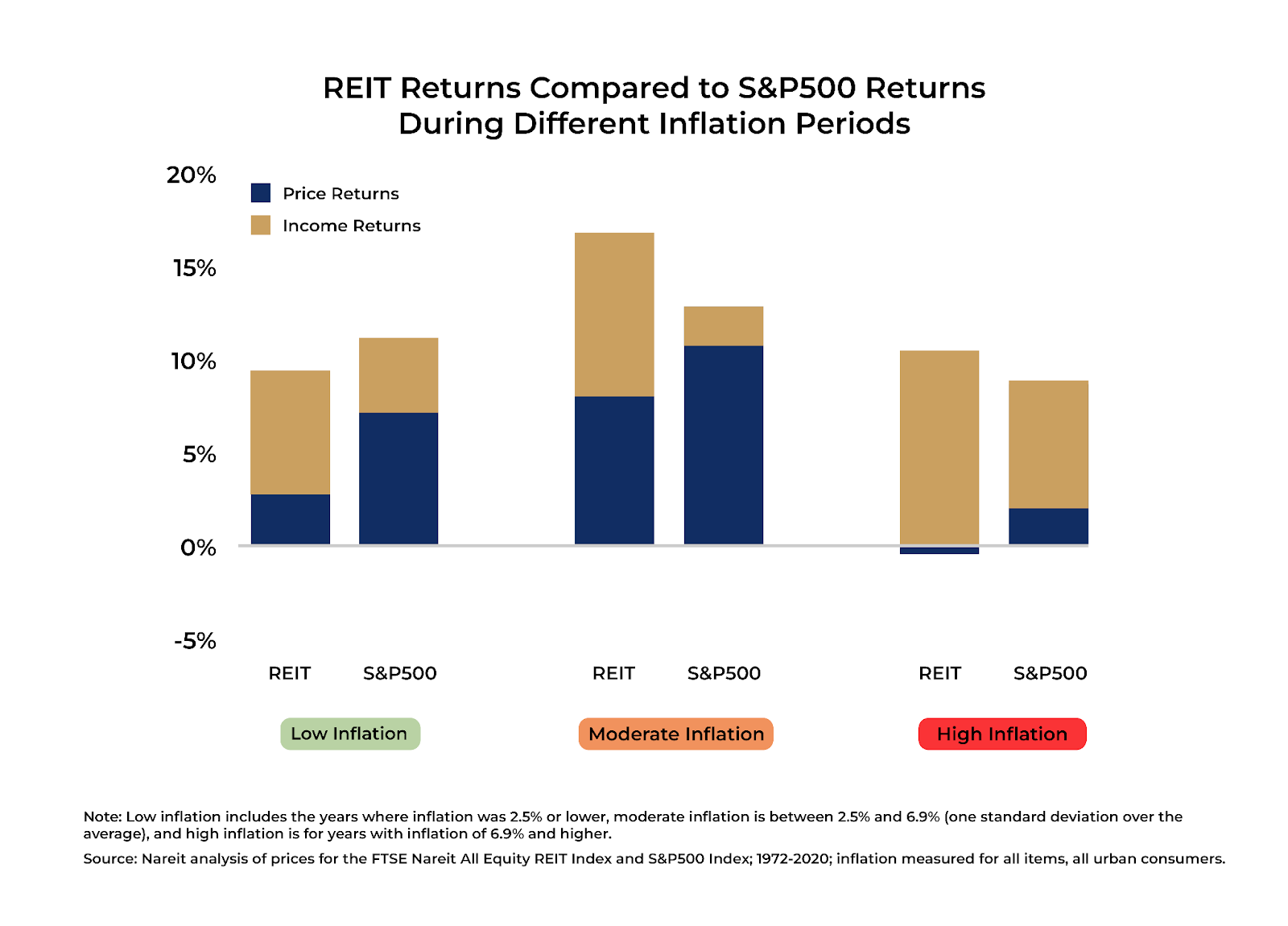 REITs, along with other capital intensive sectors, are sensitive to interest rates, given their impact on borrowing costs and yield spreads. To mitigate the downside risks, S-REITs have been managing their interest rate exposures actively. According to SGX, on average, close to 75% of S-REITs’ current debts are either in fixed rates or hedged through floating-to-fixed interest rate swaps.

In addition, S-REITs currently have an average gearing ratio of 37%, comfortably below the regulatory threshold of 50%. Gearing ratio, which measures leverage, is calculated by dividing total borrowings by total assets. A lower gearing ratio below the threshold implies healthy balance sheets and that S-REITs can service their debt and still have room to raise more debt (if and when needed) for additional acquisitions or operations.

Looking at periods in the past where the Fed funds rate has increased along with the 3m SIBOR rate, performance of S-REITs have been mixed.

During the taper tantrum of 2013, S-REITs fell by close to 17% over 9 months. In 2015, where global markets experienced a sell-off with the Greek debt default, a sharp fall in petroleum prices, and slowing growth in China, S-REITs fell 9% over 8 months.

However, from the time we saw the first rate hike in late 2015 to when the Fed funds rate hit 2.25-2.5% (the highest in ten years), S-REITs delivered stellar performance of almost 73%.

So far this year, S-REITs have remained relatively defensive after the Federal Reserve increased interest rate nine notches (once in March, two notches in May and three notches in June and July). For the first six months of 2022, while global equities (as measured by MSCI World index) fell close to 20%, S-REITs are down 2.9%. Despite the large hike in July, S-REITs gained 3%.

But what if we are heading towards stagflation or recession?

The effects of higher inflation are difficult to ignore. Along with global central banks,  the Monetary Authority of Singapore (MAS)has tightened monetary policy to rein in inflation. The labor market remains robust (unemployment rate of 2.9% and 242 job openings for every 100 unemployed persons), and domestic and global economic growth is still expected to be positive. MTI stated earlier in July that Singapore does not expect its economy to slide into a recession or stagnation in 2023, despite global headwinds.

We looked at how S-REITs have done when Singapore’s GDP has grown or contracted over the last 10 years. 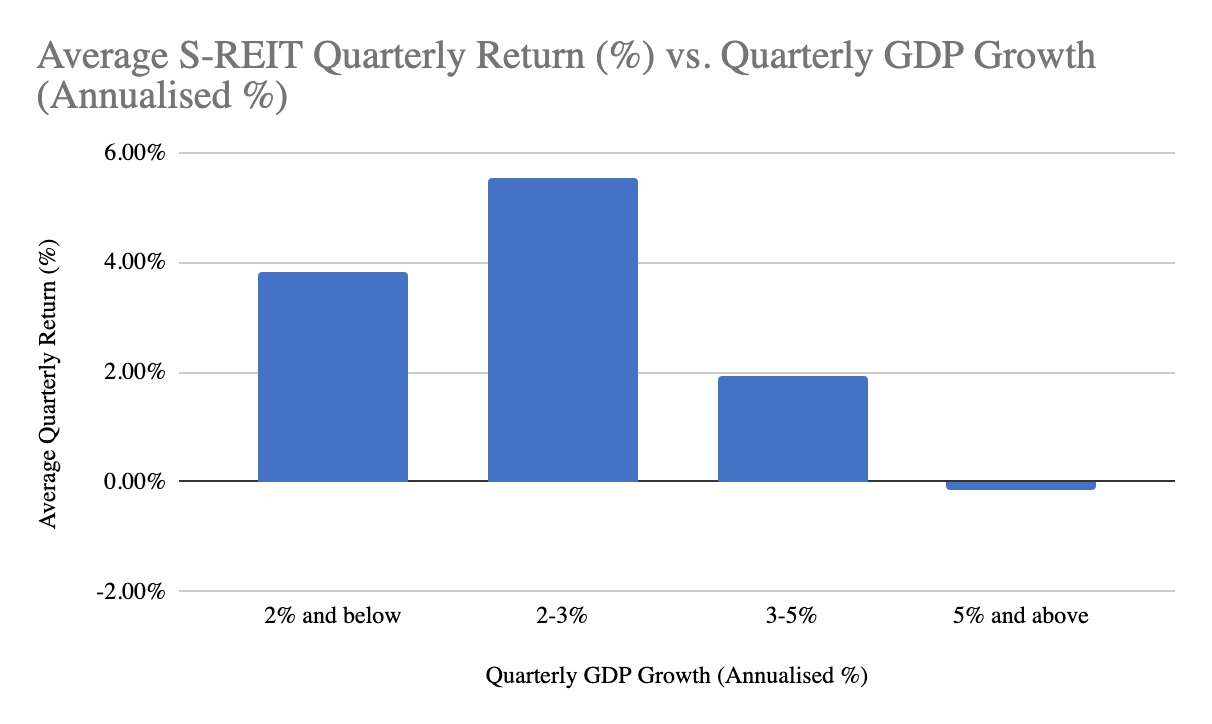 Perhaps surprisingly, REITs tend to have moderately positive returns when the economy grows at 2-5%, and grow more in periods of lower growth than in periods of higher growth. As this year’s forecast is expected to fall between 3-5%, even if growth comes in slightly under target, S-REITs could still be in a good spot – a bit like Goldilocks: just right!

Average yields for 42 S-REITs and Property Trusts was 7.2% (as of September 30, 2022). For Syfe REIT+, which tracks the iEdge S-REIT Leaders Index made up of the 20 largest and most liquid S-REITs, the average dividend yield is 6.2%.

High dividend yield (5-year average of 5%) makes S-REITs attractive to retail and institutional investors seeking an income solution and as a hedge against inflation. As compared to government bond yields (3.0%, with duration risk but almost no credit risk) and fixed deposit rates (2+%, low risk but with lock-ins and limits). Even compared to STI, which is closer in risk profile to S-REITs, the 12M average dividend yield of S-REITs is still higher than that of STI (7.2% vs 4.1%).

The case for dividends

Investment strategies focused on dividends have been a rare bright spot for the first half of 2022. US-listed dividend ETFs have gathered US$25bn in inflows despite the rout in US equity markets.

Over the long term, dividends have proven to be a significant driver of total investment returns. During periods of market volatility and when capital gains may be limited, dividends provide a much-needed cushion against downside volatility.

As the old saying goes, don’t put all your eggs in one basket. A diversified REIT portfolio with exposure to Industrial, Retail, Office, Hospitality, Healthcare and Diversified REITs will be more resilient. Syfe REIT+ holds 20 of the largest Singapore REITs such as CapitaLand Integrated Commercial Trust, Mapletree Commercial Trust, Ascendas REIT and more.

By investing in Syfe REIT+, you automatically own all of these REITs. Plus, the portfolio is designed to let you invest in Singapore REITs with a flexible monthly investment plan.

Simply create a Syfe account, decide your preferred investment amount, and set up a recurring transfer through your bank. There’s no lock-in period so you can withdraw your investments anytime.